Nick Marks is the Shiz 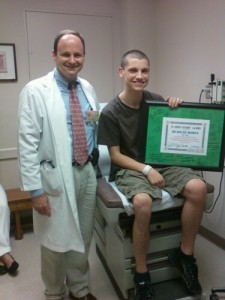 In 2008, my friend Audrey’s little brother Nick was diagnosed with cancer. After a year of chemo and surgeries, Nick is now back at it, healthy and thriving. Recently, he even received an award for being so awesome. From Audrey:

“Nick got the achievement award for kicking cancer’s ass (really it’s an achievement award for making it through chemo and having a really positive attitude). What you can’t see is all the nurses and doctors signed around the edge of the certificate. It was cool one of the doctor’s wrote: Go Nick! Go Pitt! He finished chemo in January 2009. So it’s really cool that they remembered…”

Congratulations Nick and the entire Marks family. Cancer schmancer. Love you all!

Filed under BEST Things Ever, The Crazy People I Call My Own

2 responses to “Nick Marks is the Shiz”