Dancing with the Stars: The Cast According to Kelly 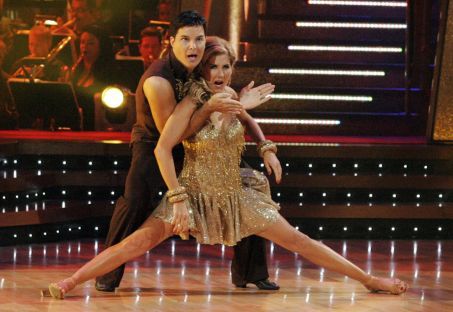 One week from today, ABC will announce the official cast for the upcoming season of Dancing with the Stars during an episode of The Bachelor Pad (which is actually going to force me to watch The Bachelor Pad which I have successfully trained my brain not to do. This will then force me to either vomit or pass out. It’s all in the name of blogging people).

I’m so excited for the new season of DWTS I may just step-ball-change until my feet fall off. But when I’m not doing that, I’m also thinking of who should be cast in this new season. We already have some of our hints and speculation (my mom thinks Kelly Ripa is going to be on because they’re doing some inane contest to see which radio host should fill in for her on Regis and Kelly while the Ripster goes on “vacation”), but I think the cast I cooked up is pretty freakin’ amazing. Please feel free to add your own picks below. Suggestions are always welcome, but not necessarily taken into consideration.

DWTS Season 11 (the cast according to Kelly):

The Olympian: This slot should be filled by someone from the most recent Winter Olympics, obviously, since our only other option would be old people like Bela Karolyi. My pick here is for Tanith Belbin or Johnny Weir. Tanith would eventually become the beautiful bombshell of the show and would be a shoe-in to partner with Derek Hough. Johnny would just be pure awesomeness, and advancing in the competition would mean a rekindling of his brouhaha with Evan Lysacek.

The Reality Star: Snookie. Done and done. The poof could prove to be an obstacle, but you know what? DWTS is all about overcoming obstacles and being a better you. Marlee Matlin is deaf. Heather Mills has one leg. Steve Wozniak was just an awful, awful dancer. We all have our handicaps.

The Rehaber: While I would hope and pray this spot would go to Lindsay Lohan – and sister would WIN that mirror ball trophy, let me find out! – she’s probably still too famous for this show. So I’m going to downgrade to Tara Reid, the poor man’s Lohan (poor, poor man). Girl needs to wake up every morning with a purpose, get some exercise and get her hair did. Tara, once Carrie Ann is done with you, you’ll be a sobbing, muttering, tanner version of yourself, with great calves and hopefully no more alcohol in your system.

The Football Player: I love this member of the cast because it’s always someone who has great rhythm and athletic ability who inexplicably CANNOT follow dance steps. While the retirees can’t be bothered to rehearse because all they really want to be doing is playing golf, the current players spend the majority of their rehearsal time giving themselves pep talks in the studio mirrors and hitting their chests really, really hard. I’m going to change it up this season and suggest Mike Golic, mostly because he’s lost all that weight on Nutra System and I want to see it put to good use. Also, I would love to see Mike Greenburg in the audience.

The Performer: You know who I want to make a comeback? Montel Jordan. I went to his concert with Boyz II Men at the Orange County Fair when I was 11, and I’ve decided that I need more of that in my life (not the Orange County Fair though, that place is terrible). He can dance, he can be in front of crowds. But he’s not too overwhelming, like Nicole Scherzinger. I like this pick. And maybe Philadelphia could parlay this into some kind of rejuvenation campaign, and “This Is How We Do It” can be the theme song.

The Funny Lady: I’m sure everyone is going to want me to say Betty White here. She fits that requirement of old, quirky and unpredictable, kind of like a Cloris Leachman, but sweeter. Sorry, I can’t do it. She’s the obvious choice. For this category I’m gonna pick Bonnie Hunt. I absolutely adore her, I think she’s charming and she’s good for a few funny quips about old, jiggly body parts. Also great would be Kathy Griffin, but again, probably too famous (however D-List she may claim to be).

The Not-Really-Famous Famous Person: Kathy Griffin may reconsider participating in DWTS if my next pick is on the show: Levi Johnston. LEEEEEVIIII Johnston. Ok, he may be an absolutely crazy, deadbeat dad running around Alaska impregnating teenage girls and single-handedly taking down the Republican Party. But I think he’s hot. “Sex on Skates” would become “Sex in Ballroom Dance Shoes.” Doesn’t really have the same ring to it, but this kid’s just trying to be famous and I want to help him. Vote for Levi!

The Soap Star: I think by contract DWTS has to have one unrecognizable soap star rounding out its cast of characters. There are so many ridiculously good looking people I have never seen before sashaying across that dancefloor, and this can be the only explanation. So this season, I pick Jason Thompson from General Hospital, mostly because I actually used to watch GH when I was in high school, and his stage name (Dr. Patrick Drake) reminds me of Dr. Drake Remore.

The Rocker: Every season there’s some hard-nosed contestant who certainly does not fit the mold of your general ballroom dancer, prancing across the floor and acting all sentimental and what not. Even though “Rocker” in this sense doesn’t necessarily mean musician, I’m picking Benji Madden. He’s tatted up enough to do some edgy dance moves with (fingers crossed!) partner Lacey Schwimmer, but could definitely be dashing in a tux for the Fox-trot.

The Dark Horse: And finally, in every DWTS cast, there seems to be someone who just has that “it” factor. Someone we probably don’t really know that well, who isn’t that famous, but is just so gosh-darn charismatic that the world falls in love with them. For me, this is Gabourey Sidibe. Now, she’s probably too busy starring in films, getting nominated for Oscars and loving Justin Timberlake, but her giggle is infectious and I think she is FIIIIIEEEERCE (that’s Tyra Banks fierce, ya’ll). She’s just so cute, and I would love to see her paired with some hunk like Maks or Tony. Gabby, come join us!

2 responses to “Dancing with the Stars: The Cast According to Kelly”