This Whole Big East/ACC Business Has Got Me All Upset 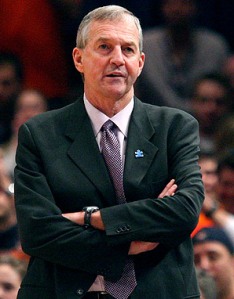 Approximately 7 wonderful years ago, I was a junior at Boston College. I was working, as most of you know, as a manager for the men’s basketball team, and the school and athletic department had just recently cut a deal to move from their ingrained spot in the Big East to the every-shade-of-blue ACC.

Well, there were some people who didn’t take this news well. And by some people, I mean UConn basketball coach Jim Calhoun. So while BC did their farewell tour of the Big East Conference schools in the winter of 2004-2005, Jim Calhoun continued to spew venom our way. And I’m pretty sure he vowed he would never, ever, play us again. Ever.

Well that’s going to be pretty tough when your campaign to join the ACC ends up being successful, isn’t it Jimmy?

Ok, so here’s the thing. I don’t like when people make outlandish statements about how much someone else is wrong and then they go and do the same thing. It’s what conservative politicians do all the time. And I’m sick of it. Also, I already didn’t like Jim Calhoun, so this whole business is just not sitting well with me at all.

The Big East Conference holds a very special place in my heart. And even though I was part of a member-school that seceded from the Union, I always held a lot of respect for Big East teams, and I am quick to point out the ways the move hurt Boston College, as well as the ways it helped us. So over the weekend, when I heard Pitt and Syracuse were applying for ACC status, something inside me died a little bit. Slowly but surely, the idealism I have about college sports is fading.

I do not believe in super-conferences. My dad explained to me yesterday that there’s a belief among conference commissioners that the 10- and 12-team leagues will be going along the wayside, and only the super-conferences will survive. Yeah, I remember that being the same belief held during the Roman Empire. And we all know what happened there. Pick up a book.

To me, these larger-than-life conferences will be too big for their own good. And if we’re solely basing this on football (which we are, because this is all about money), how does the ACC become a powerhouse with Syracuse and Pitt’s football teams? They’re ok (Syracuse is sometimes great), but not consistently. Not in the past few years. Boston College has gotten worse. Georgia Tech, Clemson and Virgina Tech seem to be steady, but they’re not Alabama. And what happens when they decide they want to be Alabama, and they deflect for the SEC?

I just think that at this moment in time, everyone wants to be the first to pull the trigger. Everyone is making preemptive moves to protect themselves down the line. But I have a strong guttural instinct that once everyone’s done realigning themselves, we’ll find that all we’ve done is throw a bunch of puzzle pieces in the air. And then collected as many as we could so we weren’t the only person without a piece. And then realized that none of our pieces matched. Ok, you really have to want to see this analogy, but it’s there. I promise.

Filed under College Basketball Is My First Love, WORST Things Ever