The Road to One Shining Moment Starts Here 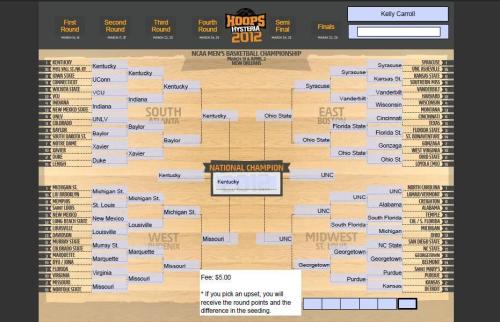 Are you ready? I mean, ARE. YOU. READY? I know a lot of people don’t count Tuesday and Wednesday’s play-in games as the “actual” tournament, but I beg to differ, because it just extends the Madness! Plus, I have South Florida making it to the Sweet 16, so I really need them to get past Cal tomorrow.

So let’s discuss my bracket. I have Kentucky winning it all, which I’m not super excited about, and I’d be fine with it not happening, even if it means I lose out on this year’s bracket pools. I’m just such a Calipari hater. But, other than Indiana pulling off another UK upset, I just don’t see them losing. My other Final Four teams: UNC, Ohio State and Missouri. Don’t hate the player, hate the game.

Some notables on this bracket:

1. I have a Xavier/Duke upset. I kind of hate Xavier too, and I didn’t like what their players had to say after the Cincy fight earlier this year, but I think they might be tougher than Duke, who seems a bit rattled after the ACC tournament.

2. I have Louisville over Michigan State. Siva is good. Siva is fast. The new orange uniforms are blinding. So many factors at work for the Cardinals.

3. Ohio State vs. Florida State is going to be the best game of the tournament.

4. As I said above, South Florida is going to the Sweet 16. They’re good and athletic. They finished in the top half of the Big East (before West Virginia AND UConn, might I add) and they should have beaten Notre Dame on Thursday night at the Garden. Hopefully receiving a play-in bid doesn’t hurt their spirit.

5. Purdue may be my sleeper team.

Ok. We all set? If you haven’t already, download the NCAA March Madness app for your phone/tablet/whatever so you can have access to all the tournament games. For someone like me who doesn’t have a TV in her office or cable in her apartment, this is going to be a huge asset. All basketball. All the time. It’s like heaven.

The road to One Shining Moment starts here.

Filed under BEST Things Ever, College Basketball Is My First Love, Wide World Of Sports