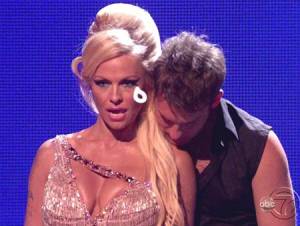 I wasn’t planning on blogging this season of Dancing with the Stars, but after last week, I feel like I owe it to the fabulousness that is going on. Not only is the dancing fantastic, every contestant is a fan favorite, making the competition that much more fierce. Unfortunately, Pamela Anderson left us last week, and her partner was Tristan McManus. Definitely gone too soon. But I still think she dances drunk, and it just could have gotten really, really ugly.

In case you missed last week, judges can award half-points this season, which should make the scoring pretty interesting. Other than that, the formula is pretty much the same, so lets get going!

Melissa Rycroft, Jive: I’m upset that Melissa Rycroft has recently had a child and still has the flattest stomach of anyone I’ve ever seen. However, she’s adorable, so I can’t really hate her. The Jive was the dance that Melissa hurt herself during her season, the nail in the coffin. So she’s definitely trying to redeem herself here. You all know how I feel about Tony – I don’t think he challenges his partners enough, and I think the same thing is happening here tonight with Melissa. There was nothing wrong with her dance, and Len’s even saying he LOVED it (oh em geeeeee), but I don’t think Tony can have a fan favorite. He’s not a crowd pleasing choreographer.

Bristol Palin, Quickstep: Bristol is a redneck because she “always has a baby on her hip,” and she’s taking Mark to a gun range for this week’s practices. I don’t even know. I would think more time in the ballroom would be more useful for her. Hmmm, this isn’t a Quickstep. At all. They are going to get in so much trouble. It’s good dancing if this was a bar and she was at some 19-year-old’s bachelorette party. But other than that, oh no. Carrie Ann is saying she’s “come so far,” which she only says when people did terrible. Also, Carrie Ann just said “guess what, slam back,” referencing Bristol and Mark’s total disregard of the Quickstep rules. I guess the slam back will be a low score.

Helio Castroneves, Jive: Helio took Chelsie to the racetrack this week, and I’m kind of over everyone showing the audience “what they’re all about.” We got enough of that the first time around. Let’s get to the dancing please. This is a great Jive! I love when the Jive isn’t hokey, and 50’s-ish, but is more dance-oriented. The kicks were really fast, and the spins were on point. I could do without the hot pink jacket. But the dance was great! Bruno is being super critical tonight, which is really unusual. He said something about Helio having a misstep on the stairs, when usually he’s just gyrating and yelling. Simmer down, Bruno.

Apolo Ohno, Quickstep: I’m surprised that no one’s discussed Apolo’s hair with him before. It’s been years since he became famous, right? Something should have been done by now. His facial hair is included in that statement. I’m excited for his Quickstep, though. It’s got to be better than Bristol’s. I mean, it already is because no one is in denim. So far, perfection. The quick feet are just out of control. Not as much movement around the floor as I’ve seen in other Quicksteps, but I’m glad for that, because a lot of the time I think it’s sloppy. It got Bruno out of his seat. And Len says it’s a “gold medal.” Speed with control.

I’m out of blogging practice you guys. I’m so tired.

Sabrina Bryan : In the way of Miley Cyrus, Sabrina cannot be tamed, and she over danced this week. OVER danced. And hurt herself. Note to self: never try too hard at anything. Because you’ll do something vicious to a bone or a tendon. Or someone will drop you. This Quickstep is starting at the water cooler, which is just weird and has nothing to with anything. This girl just needs to dance. She doesn’t need gimmicks. Also, the song choice? Black Betty? And leopard print floor. There’s just so much going on. But apparently she did a “treble kick” which no one EVER does. Ever. Everyone is talking about her legs. Oh my goodness, the legs! And even Len loved it, so I smell some good scores.

I have a sneaking suspicion that Sabrina and Apolo are related. Just throwing that out there.

Kirstie Alley, Jive: Next to all these fantastic dancers, it’s hard to believe that Kirstie made it to the finals of her season. And it’s really bothering me that Kirstie and Maks storyline is sexual tension because it’s really uncomfortable. Stop the 50 Shades of Grey references. Stop. Kirstie is three lifetimes of Shawn Johnson, so she has to try harder. That’s nuts. Well, she’s not as fast as the others, and her footwork isn’t as great. Bt she’s selling it. Which I guess is half the battle.

Emmitt Smith, Quickstep: Emmitt’s not intimidated. By a speed skater? And and race car driver? Come on, now. Again, great footwork. Good posture. But there’s wasn’t a sparkle to the dance. It was nice. And clean. But there wasn’t much else to it. Carrie Ann feels like everyone so far has upped their game, while Emmitt has stayed the same. “You should be afraid of the speed skater,” she said, while doing three snaps in a “Z” formation, Fly Girl style (ok, that last part I made up). Ouch.

Drew Lachey, Jive: Drew was in the bottom two last week, for the first time ever. He and Anna are out to make sure that doesn’t happen again. By slapping each other? I’m not sure if that’s going to do it you guys. Drew just held himself sideways on a pole, which I think is the hardest thing ever, so he should get a 10 just for that! His cut off sleeves could negate all of that though. He’s definitely much looser this week, and much more comfortable, which is great. I never watched Drew’s season, so last week, I was like what the what? This guy? But he did a great job tonight, even though the skater-chic Jive was a little weird.

Why has Nick Lachey never been on this show? Does that surprise anyone else? I feel like he’d star in a grammar school play if it offered a little PR. Also, his baby’s really cute.

Joey Fatone, Quickstep: I loved Joey last week. I never saw his season, but he was fabulous in his Cha-cha-cha. He’s a showman, and that really works in his favor. This week, Kym is wearing an awesome sparkly swim cap and it is totally distracting me because I want one! Wait, they’re dancing to a 1920s version of Radiohead’s Creep, and I love it! Yes, there were some mistakes. But it was a lot of fun. Len ran down a list of what he did wrong, but then said he loved the entertainment of it. He’s definitely my favorite so far. I’m interested to see what these scores are going to be.

Shawn Johnson, Jive: I think Shawn and Derek are the same person. They have the same exact color hair, and the same tan, and if she wasn’t so tiny, I wouldn’t be able to tell them apart. Now she’s cartwheeling down the stairs. That makes me nervous. If it’s possible, she’s gotten 10 times better since her season. This girl is just sick! She never puts a foot wrong, and she’s gotten more and more confident in her performance. Len wants more from her. I mean, she was perfect! She shouldn’t get penalized because she’s great. Carrie Ann says these two are the “All-Star Sweethearts!”

Kelly Monaco, Quickstep: I don’t know a lot about Kelly, but she seems crazy. She has no filter, like at all. She’s gonna get Val some fake boobs, and she how good his posture is. Which is actually hilarious. They’re water balloons, and they totally pop, and that was a great segment. Thank you Kelly, for that little dose of laughter. I feel like there was little Quickstep content in this dance, it was more a waltz than anything else. But it was sweet and elegant. The one-foot spin at the end was pretty. She should be ok. Len called her “hunchy-grunchy.” No idea.

I just saw a commercial for Cloud Atlas. I feel like it’s definitely one of those movies that’s going to send me into a deep anxiety attack halfway through, like Inception.

Gilles Marini, Jive: What a fox. There have been good looking men on this show, but he’s just classically handsome. And tall. With an accent. Ohmygoodness. Gilles has an injury. And he needs to rest. But it won’t stop him. Yikes. How do you do a Jive with a strained hamstring? Oh, like this. With a solo to boot! I think they make up these injuries sometimes. I don’t believe it for a second. Also, can someone get/make me a pair of those pants with the fringe? I would just wear them all over my apartment all the time. Aw, Gilles dad passed 17 years ago today, and he’s dedicating his dance to him. Tearjerker!

It’s clear Bristol has to go. Get the hook!

Tagged as Dancing with the Stars, Reality Television