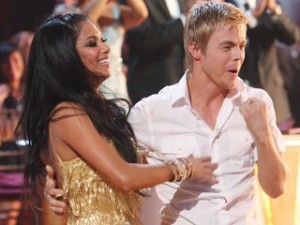 Now, this might not come as a shock to a lot of you, considering Nicole blew away the competition for most of the season, but after Monday’s showing, the judges had me thinking it could be anybody’s game. (I’m also pretty confident in my suspicions that the judges give arbitrary scores based on what producers want, but whatever it’s good TV!)

Tuesday night was a night of showmanship and fun, and what a great way to end what has been one of my favorite seasons! All of the contestants were back for one more dance (Kate Gosselin is still terrible), and past winners and contestants crowded the audience to get a taste of the greatness that was Season 10.

While Erin was the first finalist eliminated, Evan made a go at catching up to Nicole after his poor scores on Monday (which weren’t at ALL deserved). But in the end, no one could catch her. Nicole’s final dance? Amazing! And I’m glad Derek was able to grab the Mirror Ball Trophy one more time. Poor Derek, now he has to leave Nicole to be placed with yet another beautiful dance partner, I’m sure. He needs to watch himself though. After telling Nicole that Season 10 has been his favorite so far, dirty glares could be felt all around the audience, from Joanna Krupa to Brooke Burke. Watch your back Derek, you heartbreaker!

Season 11 begins in September, so take this summer to perfect your Pasos and Jives. Until then my friends, it’s been a pleasure!

One response to “Nicole Scherzinger is Our New DWTS Champion!”