The War in My Office is On! 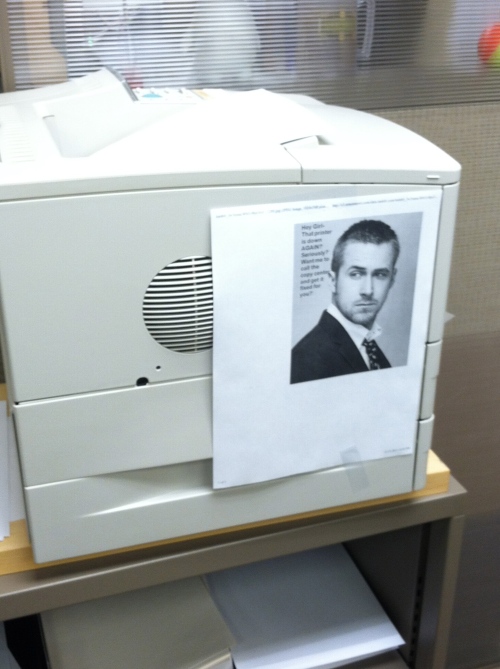 Everyone is aware of my love for Ryan Gosling. He’s just so many things I can’t even gush about enough. In an attempt to not become the stalker that I am, I’m going to stop there.

So the Gosling’s star is on the rise, and he’s been the subject of many tumblrs dedicated to him. Almost all of them are made up of simple pictures of the actor, with simple phrases pasted on the page, all starting with the opener, “Hey Girl.” See one example here. This is all the background information I can give you on this right now.

There is one person in my office that I work with the most. We’ll call him Sean. He just happens to be male in gender. Male in gender? I mean it’s accurate, but it sounds strange. Whatever, I’m going with it. My office is female-dominated. He’s the only guy in our group. It’s a dynamic. 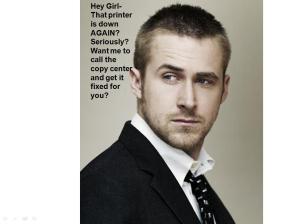 A few weeks ago a friend of mine (thanks Mary!) pointed me toward the Ryan Gosling Works in Publishing tumblr. Check it out, it’s hilarious. The sayings include everything from galley copies to summer lists and it’s all so funny if you’re a book dork like everyone in my office. One in particular struck me as great – “Hey girl – That printer is down AGAIN? Seriously? Want me to call the copy center and get it fixed for you?” This hit home for me because we probably have the worst printer in the world, and every time I go near it, it jams. Ask anyone. I have some kind of weird energy that makes the printer act awkwardly. It works on people too.

So I taped this Ryan Gosling picture to the printer and I spent a week telling people “this is how you turn the printer on.” See what I did there? It’s a play on words. Double entendre. I am so smart.

Well, Sean, being the only male in the office, did not like this. One, because Ryan Gosling is so good looking and I think Sean didn’t like the female attention being deflected away from him. And two, because one time I hid his Mona Lisa print in the men’s room because I felt like her eyes were following me around the office and Sean did not take kindly to this. So I give you exhibit A below. And I’m not going to lie. It’s pretty funny. 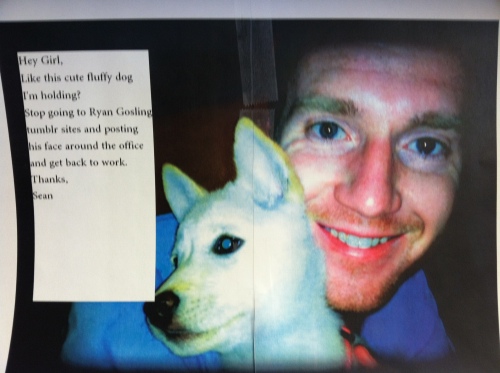 So Sean and I are now in a tubmlr war. This is the kind of stuff I live for. I will keep you all posted on future outcomes (Update: Sean posted J.Lo over Ryan Gosling on the printer and the lady faction of the office did not enjoy it at all).

I insist that I will claim victory! Ryan Gosling Forever!

Filed under The Crazy People I Call My Own