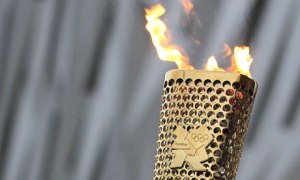 In an effort to gear up for the Games starting this week, I spent the majority of my morning not showering and not eating breakfast so I could watch YouTube clips of great Olympic moments. This was all well and good until all the triumphs went to my head and I started crying my eyes out. Great way to kick off my last week at my old job – late, hungry, and blotchy-eyed. Totally normal.

This morning, the Telegraph is showcasing the “Top 50 Tweeters to Follow” during the Olympics. So power up those iPhones and get to following, if you aren’t already. A true fan must be on top of the Games at all times. We’ve waited four years for this. I will allow nothing less.

Number 5 on our list, Muhammed Ali lights the Atlanta flame:

The burning flame has been a steady Olympic tradition since the 1928 Games. It’s an homage to the Greek myth that Prometheus stole fire from Zeus for human use, and was a part of the ancient Olympic games in Greece. The flame is lit in Athens, and relayed from Greece to the site of the Games. The Olympic torch is lit from the flame at Olympic Stadium during the Opening Ceremonies, and is kept burning throughout the Games.

It has become tradition that a famous athlete or athletic figure from the host country lights the Olympic torch. And usually, the identity of the lighter is kept under wraps until the torch is in his or her hands. In 1996, the athlete was Muhammed Ali, and his lighting of the Olympic torch became an instant classic.

Once the greatest athletes of a generation, Ali has been battling Parkinson’s disease for decades, and is unable to stand without shaking. Walking onto that Olympic podium, being handed a flame that represents thousands of years of athletic tradition, and being able to hold himself steady enough to light that torch is probably one of Ali’s greatest feats.

It’s very rare that a moment of only a few seconds can live on forever in history, but that’s what the Olympics are all about.

Filed under BEST Things Ever, Wide World Of Sports