Current situation: home sick in bed. The excitement of the upcoming holiday has gotten the better of me, and as I type I’m spraying chloraseptic into my mouth and bouncing in and out of a Nyquil-induced haze. So bear with me.

END_OF_DOCUMENT_TOKEN_TO_BE_REPLACED

Filed under BEST Things Ever, Holidays

Tagged as Awesomest, Family, Friends, How Life Should Be, Inspiring, Videos

What Comes from One Act of Courage 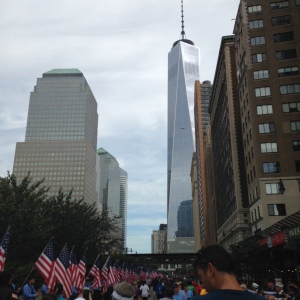 The Freedom Tower from this year’s Tunnel to Towers run

This September, we all marked the 14th anniversary of the 9/11 attacks. On Sunday, September 27th, the Stephen Siller Tunnel to Towers Foundation marked its 14th commemorative run through the Brooklyn Battery Tunnel.

On the morning of September 11, 2001, firefighter Stephen Siller was ending his shift at his firehouse in Park Slope. When he heard the news of the first plane hitting the World Trade Center, he grabbed his gear and drove his truck toward the site, only to be stopped at the Brooklyn Battery Tunnel, which had been closed.

With all his gear on his back, Siller ran through the tunnel toward Manhattan, the opposite direction many of us would have chosen to run. After reaching the World Trade Center site, he would later lose his life helping others.

During the past 14 years, the 5K that commemorates Siller’s act of courage has not only grown to more than 30,000 runners and walkers, but the organization that bears his name has become a multimillion-dollar supporter of wounded warriors and first responders.

END_OF_DOCUMENT_TOKEN_TO_BE_REPLACED

ESPN’s First Pitch and the Healing Power of Sports

I am a firm believer in sports as a microcosm of life. You find something you love. You try your best. You will have success. And you will experience failure. You’ll have opponents, and you’ll have teammates. Sometimes, you’ll face challenges on your own, too.

Like life, the triumph isn’t in the victory. It’s in the trying. It’s in the journey. It’s in learning the lesson and moving on, to be a better player, a better person, the next day.

END_OF_DOCUMENT_TOKEN_TO_BE_REPLACED

Filed under Wide World Of Sports