And Now for the ‘Moment’ You’ve All Been Waiting For…

Tonight’s the Final Four! And while I’m home for Easter and missing the annual Final Fourties party that me and my college friends have (watch the Final Four, only drink 40s, it’s pretty self-explanatory), I’ve been going through basketball withdrawal for the past few days (a withdrawal that the NIT just couldn’t help), and I can’t wait for tip-off at 6:07 p.m.

First up is Butler-Michigan St. Both of these are five seeds, so there’s no real underdog, unless you consider that Butler’s basically in their backyard and will most likely have the crowd on their side. I’m rooting for Butler, because I think Brad Stevens is hot. Can he be the next coach at BC? I could get on board with that. Oh, he’s married? Nevermind.

Second game is all important, because, as you’ve read, I have West Virginia winning the whole thing. I got a print out of my pool standings at the beginning of the week, and if the Moutaineers are the next national champions, I think I at least tie for first. So, there’s a lot at stake here.

Ok, Clark Kellogg is breaking down the first game as we speak. Will be updating throughout. Go Mountaineers!

This picture is silly.

Update, 6:13 p.m. EST: I really don’t like raised courts. Who invented those? I always think someone’s going to hop right off and break an ankle.

Update, 6:26 p.m. EST: Draymond Green reminds me of what I must have looked like when I was 5’8″ in fifth grade and would play point guard/center in my Catholic School league.

Update, 7:15 p.m. EST: I feel like the majority of President Obama’s day is spent playing basketball, watching basketball or filling out his bracket. Clark Kellogg’s interview just gave me a flashback to Brian Williams’ special.

Update, 7:58 p.m. EST: I like when the Final Four is referred to as the “national semi-final,” like when the Elite Eight round is called the “regional championship.” 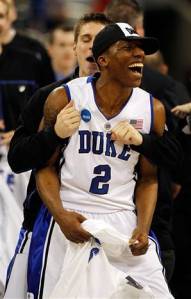 We'll know by the end of the night who our final two teams are. nbcsports.com

Update, 8:24 p.m. EST: Rebound by Nored, then he’s fouled. At the line shooting two shots. Draymond Green fouls out. I love him.

Update, 8:26 p.m. EST: Refs give Izzo a timeout by accident. Izzo almost pops a cap in somebody. Has to be held back by Green. (NOTE: I’m actually not really sure what happened. Izzo may have been upset about the clock.)

Update, 9:12 p.m. EST: Watching the West Virginia team be announced, I get why St. John’s needs a coach who will keep the NY talent in NY. 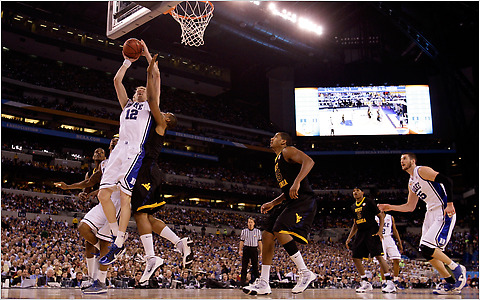 Duke leads WVU by 8 at the half. Andy Lyons/Getty Images

Update, 10:50 p.m. EST: I don’t want to lose faith in my Mountaineers, but I also know that Duke’s hard to come back on. And I really hope Da’Sean is ok.

Update, 11:16 p.m. EST: Alright, it’s time to throw in the towel. Definitely going to be a Duke-Butler National Championship game, a game I don’t think anyone could have predicted. Had a great season following the Mountaineers. They accomplished a lot. Now I guess I have to root for the Bulldogs. See you all Monday night!

Filed under College Basketball Is My First Love