Tonight, the celebrities take on the Argentine Tango or the Samba AND a Swing Dance marathon. Since the last Mambo marathon was so successful, I cannot wait for the Swing one! All of the dancers in the competition now are truly talented, and could win, so this season of Dancing with the Stars just. got. interesting! And Pam Anderson is loving her new brown ‘do. Let’s get this going!

Jake Pavelka, Samba: I think the thing I find most endearing about Jake is that he refuses to wear his shirt. Looking for the ladies’ vote there Jake? But, he’s truly adorable, and putting a lot of personality in his dances. The Samba always confuses me, and I’ve never seen anyone, save Melissa Rycroft, do a good one. So Jake’s was a little underwhelming. After a little trip-up, which he controlled, Bruno said he “didn’t wiggle correctly.”
Score: 7, 7, 7

Evan Lysacek, Samba: I love Evan. And I love Evan and Anna. I really think he’s a frontrunner, and I’m gonna call it now that he wins. Hmmm, Anna tried to kill him by flipping his massive body over her tiny, little itty-bitty back, no big deal. He’s alright. Shake those hips Evan! He’s another one that doesn’t like to wear a shirt. I think Bruno is going to love this. Oh man, was I wrong. I’m just blinded by my favorite. Carrie Ann said he “lost the battle with the Samba.” Booo Carrie Ann! The Samba’s just too hard!
Score: 7, 7, 7


Niecy Nash, Argentine Tango: A funny Argentine Tango? I don’t know about this Niecy. This dance is so HARD. Think Gilles Marini – best one ever (watch video above). Hmm, I feel like I’m watching a Cloris Leachman dance. Ok. It’s getting a little better. Oh go girl – she just kicked her leg up to Louis’ shoulder. It was pretty good. But I don’t think Len’s going to like the hi-jinks. Ugh. I’m 0-2. Len doesn’t mind the comedy. Clearly I don’t know DWTS as well as I think.
Score: 7, 7, 7 (are we just giving everyone the same score tonight, judges?) 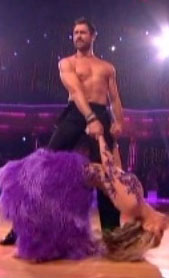 Erin Andrews, Samba: Why can’t anyone keep their shirt on tonight?? I think Erin and Maks basically just had sex on the dancefloor. Len’s not happy with shirts coming off. Bruno and Len are now having a dance-judge battle over the shirts. And Carrie Ann is loving it. I don’t know who to believe. Seriously, the Samba is so confusing.
Score: 9, 7, 9

Chad Ochocinco, Argentine Tango: Now as you can see from the video above, Cheryl is the Argentine Tango queen, and if she can’t get a great dance out of Chad, no one can. Chad looks a little nervous. Nice lifts – way to make use of Chad’s strength. It was good, but not as fast as it could have been. I always feel like Chad does a lot of technical stuff that you can’t see, but that the judges appreciate.
Score: 8, 8, 8 (Chad’s highest score this season, and Len’s highest paddle of the night!)

Nicole Scherzinger, Samba: When Nicole thinks Samba, she thinks Ricky Martin. However, “this is not the Brazilian dance party” she thought it was going to be. And she’s also become a little paranoid and crazy about the cameras and FREAKING me out. She’s getting like Barbara Streisand where you can only film her from one side. Odds are 1 to 2 Derek takes his shirt off. Another near perfect dance. This girl can’t be stopped! I bet someone is going to sabotage her in the Swing marathon. Of course, Len hated it.
Score: 9, 7, 10 (and Derek’s shirt comes off in the fishbowl. called it.) 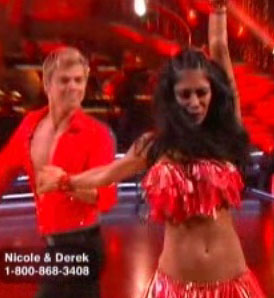 Watch out Ricky Martin, it's Nicole!

Pamela Anderson, Argentine Tango: I think Pam is the greatest wild card in this competition. She’s only an ok dancer, but she’s puts so much passion into her dances. They are so fun to watch. And she put in some serious lifts in this Argentine Tango. When asked how she makes a comeback every week, Pam answered, “I like to be on top.” Classic.
Score: 7, 7, 8

SWING DANCE MARATHON I have a feeling that this is going to be hilarious. The routine is double the amount of time, lifts are allowed and all the dancers will be on the floor at the same time! Derek may actually throw Nicole into the audience. Chad may start throwing blocks on people. Winner gets 10 points. I’m a little scared.

Jake and Chelsie are the first to go. I’m shocked! They were doing way better than Pamela. And Chad’s shirt is off. That’s four tonight. Niecy and Louis are the second couple to go. And I just saw Erin’s underwear. Evan and Anna eliminated third. I really don’t know what the judges are looking at. Chad just jumped over Cheryl. And Erin and Maks are doing a lot of jazz hands. Chad and Cheryl are out. Why are Pam and Damian still in?? Derek is the king of the marathon. Pam and Damian gone. I’m expecting a cat fight between Nicole and Erin. And Nicole and Derek just stepped it up a notch! Way to take it home!! Nicole and Derek win….and are still going!!!!!!!!