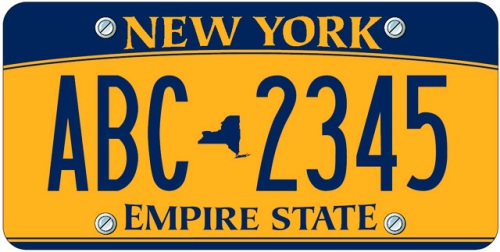 After spending the past four days on the magical Island of Long, I noticed that almost every car passing me on the roadway was carrying the new blue and gold New York State license plate, which New York began issuing on April 1 of this year. Retro and awesome, these plates are a throwback to the plates of the 1970s, and come with a pimp name like “Empire Gold.”

“Traditionally, new license plates are offered approximately every 10 years and the last time we issued a new plate was the current Empire plate in 2001,” offered NYS Department of Motor Vehicles Commissioner David Swarts in April. “We are proud of the retro design of the new Empire Gold plate and we are pleased to offer it to the motoring public.”

While New York State isn’t forcing the “motoring public” to get rid of their regular blue and white Empire plates (which I never liked by the way), I’m urging everyone I know to go out and pick up a set of Empire Golds. They look super cool on your car, and my grandfather, probably the coolest guy that ever lived, still has his original pair hanging in his garage. Serious swagger.

And, if you’re really into this business, let’s petition the DMV to start making the Statue of Liberty plates again. They were the best. I cried when we had to take them off of our car and return the plates to the DMV, and I still get a little misty every time I watch Ghostbusters II.