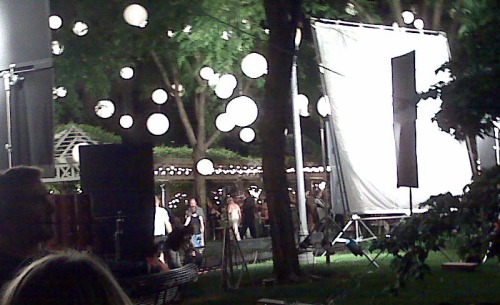 So I was just innocently walking to meet some friends in Boston’s Financial District last night, and I stumbled across the set of What’s Your Number?, a new film starring Anna Faris, or “the chick from the Scary Movies,” as some curmudgeon and jaded PA told me.

According to imdb.com, the basic storyline is “a woman looks back at the past twenty men she’s had relationships with in her life and wonders if one of them might be her one true love.” That’s a lot of relationships right? How old is this woman? I guess not all of them were serious, if you know what I mean.

This scene in particular was a wedding scene that was very Gatsby-esque and exactly how I would want my wedding to look if I ever find someone crazy enough to marry me. My favorite part of the set were the balls of light and white lights hanging above the “guests.”

I love that another movie is shooting in Boston! Excited to see the end result!