The One Thing China and the US Can Agree On: Pandas are Awesome 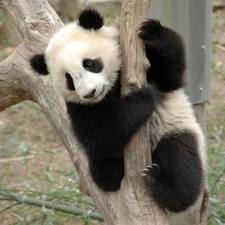 My friend Audrey is convinced that pandas are really people in panda costumes. Convinced. And while I know this isn’t true, at times the girl has me agreeing with her. I mean, even a real panda looks fake. But really, they’re just so gosh darn adorable. And as it turns out, China’s going to let us keep some. Yay!

According to the Washington Post, DC’s National Zoo (it’s across the street from Zoo Bar on Connecticut Ave, NW, you can’t miss it) and the Chinese government have reached a deal that will keep the zoo’s most famous attractions – Tian Tian and Mei Xan – in the states for another five years. Apparently there’s some stipulation that American scientists are going to study the pandas’ behavior and what not, yada, yada, but I really think it’s just so we can watch them roll around and eat bamboo. Seriously. Everything they do is adorable.

When I was living in DC in 2007, I was able to visit the zoo and get a glimpse of Tian Tian and Mei Xan’s baby, Tai Shan. Ohmygodsocute. But Tai Shan was sent back to China in February and forced to join a work camp…er, a breeding program. Just like us humans – celebrity in America, practical slave labor in China.

One response to “The One Thing China and the US Can Agree On: Pandas are Awesome”