It’s All About Pippa 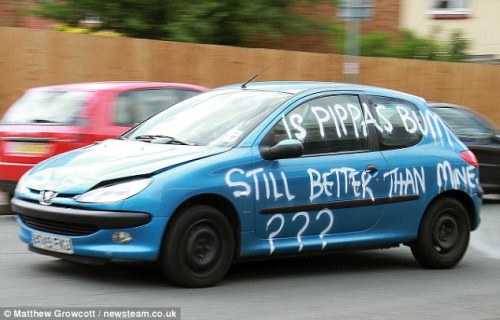 When Pippa Middleton stepped out of her chauffeured car on the morning of the Royal Wedding a few weeks back, both my mom and I gasped at how beautiful Kate’s younger sister looked in her bridesmaid’s dress. “That’s it.” I said. “She just stole the show.” While Jeanie tried to argue that nothing could take the day away from Kate and her Alexander McQueen dress, people were creating Facebook pages dedicated to Pippa’s ass. So I think I was right.

Well, it looks like someone’s girlfriend isn’t about to be upstaged by Pippa’s bum. According to the UK’s Daily Mail, someone’s Peugeot 206 was the victim of Pippa-related vandalism recently, possibly because the driver told his better half he thought Pippa was “smokin’ hot.” Ok, I wasn’t there, but it was probably something along those lines. Will boys ever learn?

The insulted sweetheart took her vengeance out on this cute little car with a bottle of white spray paint, and possibly a bat (Carrie Underwood-style) judging by this guy’s hood. God help this man if he actually ever does have a fling with Pippa. I mean, really, in his dreams.

Filed under BEST Things Ever, It's All Going In The Book

One response to “It’s All About Pippa”