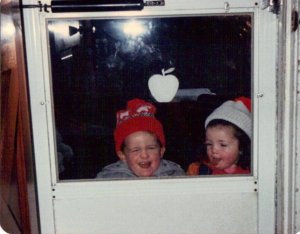 Don't worry about us. We'll just freeze out here.

Way back when, I was a mere 5-years old, and I used to attend something at my elementary school called “Extended Day.” For a few hours after the school day was over, a student could go to Extended Day to play, do homework, and wait for their working parents to pick them up. However, even an extended day wasn’t enough for my parents, who were constantly late getting me. It frustrated everyone, and before you start making excuses for them, sit tight. I’m painting a picture.

So one particular time, the Extended Day lady had decided she was fed up with my parents being late, and, because she had a second job that she had to be at at 5 p.m. (I know, dumb scheduling, lady) she flat left me at the school, locking me into the building with a carpenter who was there installing new windows. And we all know that carpenters in elementary schools are just masks for child molesters and kidnappers, so basically my life was in jeopardy. And when my mom flipped out and got the Extended Day lady fired, I was forever traumatized by the whole experience, meaning I get the sweats anytime it appears I’m going to be late for something. Also, I feel funny around carpenters.

So now that I’m living back at home, I’ve again become reliant on my parents to drive me places and pick me up, namely to and from the train station. Day one went swimmingly. We made it to the morning train with 15 minutes to spare, and mom was waiting for me when I hopped off the 5:57 from Grand Central that night. Fantastic. But day one must have been too stressful for Jeanie and Den, because by day two the whole system had collapsed.

It takes a few minutes to get out of the tunnels of Grand Central Station, so around 6 p.m. last night I texted my mom to say I’d be arriving at the train station in about 30 minutes. To which she replied, “oh, we’re in Goshen.” Now, the train station is about 20 minutes from my parents house, and Goshen’s another 30 minutes passed that. So, for those of you non-math majors, I was facing about a 20-minute wait once I arrived at Croton. Let the sweating commence.

I waited at the curb and watched all the other people from my train leave the station with their families and friends. I then watched another batch of commuters come and go, and still no sign of Jeanie and Den. When my parents finally pulled up I was outraged. “Hi, I’m Kelly, your daughter,” I said while my mom was insisting that they got held up and did not forget about me. “Oh yeah?” I asked. “Held up doing what?”

You see, it was all very important. Apparently they “went on a date” to the Holiday Inn in Middletown where someone was selling time shares, which they didn’t buy, but in the end got a free cruise and a trip to Las Vegas. To celebrate, they went to the OTB in Goshen to “bet on a race at Saratoga.”

You cannot make this stuff up.

“Oh, so it was trips to Las Vegas and gambling that caused you to forget that you had a daughter who had to be picked up?”

“And TGI Fridays.” Perfect time for Dad to chime in.

You’d think after all this time I would have learned my lesson. I shouldn’t expect Jeanie and Den to be on time for anything, nor should I assume that I’m more important than the OTB. But maybe, just maybe, one of them could pick me up on time consistently for like, a week. That’s all I ask.

Fortunately, there were no carpenters at the train station. None that I was aware of at least.

Filed under About Me, The Crazy People I Call My Own, The Funny Thing About Family Is That You'll Always Be Related, WORST Things Ever

Tagged as Family, Fighting without Shame, God Is Laughing At Me, The Crazy is Following Me, Things That May One Day Kill Me