Conan, You Were Right: It Was “Sorta Worth It” 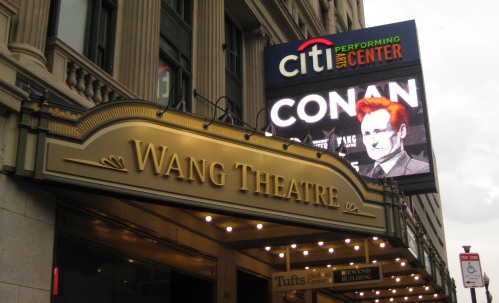 Conan at the Wang. I know, that sounds funny. And you're 5.

If I had to create my own entertainment/music/comedy show, the end result would be something close to what Conan O’Brien did last night at the Wang Theater in Boston. What I assumed was going to be a few hours of stand-up from Coco (which would have still been amazing, because I love him) was actually an all-out party of songs, theatrics, silliness, and a little bit of Walker, Texas Ranger.

Let’s start from the beginning. Has anyone ever heard of Reggie Watts? Dude’s f’ing weird; a mix between Zach Galifianakis and Sky Blu from LMFAO. But in a world where a certain kind of comedy can get real old, real fast, Reggie Watts is bringing with him a new way of making people laugh. Part D.J., part imitator, part vocalist, Watts toed the line between making me laugh and seriously creeping me out. I loved it.

Conan started his show by coming out in a Paul Pierce jersey. So fitting. He also mentioned how happy he was that there wasn’t a Celts-Lakers game on Saturday night, since the audience would have made him put the game on the big screen behind his head and wouldn’t listen to one word of the show. So true. But, Conan lucked out, and had our undivided attention all night. Even when he came out in that disastrous purple-paisley vinyl suit. I’m sweating now just thinking about it.

I had read that Conan’s NY show was chock-full of guest celebrities, and while the Boston performance didn’t pack quite as hard a punch in that area, there were enough guests to keep me happy: Andy Richter, Deon Cole and THE DROPKICK MURPHYS!! Seriously, that was my favorite part of the night, and I’m pretty much in love with the one in the leather jacket and skinny jeans. Who knew?

In true Conan fashion, the jokes were quirky and our host was most self-deprecating. And, I couldn’t help but feel special that I got to see the show in his hometown, since much of it was tailored to the Boston crowd, and must have been at least a little bit of a departure from the rest of his tour dates. Oh, and there was a shout out to Eagle’s Deli (what, what!)!!! The BC crowd was impressed (I’m looking at you Ryan Farnan, probably the biggest Conan fan I know).

The ultimate example of turning sour lemons into sweet lemonade, Conan O’Brien is certainly having the last laugh after being thrown off of television at the beginning of this year. I may be reaching, but seeing him up on stage, doing what he does best, despite everything Hollywood has been hitting him with, was pretty inspiring. And, he’s got a point: why is Snooki allowed on TV and Conan’s “Legally Prohibited?”

Thanks Conan for a great party.

Tagged as Awesomest, Celebrities, Concerts, Music, The Men I Love

One response to “Conan, You Were Right: It Was “Sorta Worth It””