But if You Can See Into the Future… 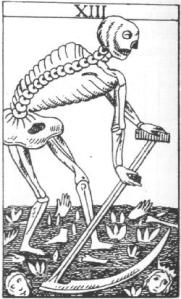 …shouldn’t you have known this was coming?

The woman told police that her rival – who is described as having “dark hair and a gold tooth” (as well as an eyepatch and peg leg, oh no wait, I made that up) – came to her home under the pretense of wanting a tarot-card reading. Once she had entered the home, the rival allegedly told the woman that she doesn’t “take warnings very well,” and threatened to cut out her tongue if the woman didn’t take down her signs and close her business.

According to police reports, there is an ongoing dispute between the woman and her rival tarot-card reader, who she “doesn’t know but often sees at carnivals and festivals around the area.” Apparently the two had a “verbal confrontation” a few weekends ago in Amagansett.

Ok, three things. One, who makes enough money reading tarot cards to live in Water Mill? And where do I sign up for that job? Two, usually when I get in fights with people at the local carnival, I don’t do their tarot-card reading a week later. And three, this woman should just do her own reading and she what card she gets, then she’ll know how this thing is going to play out. Anecdote! In college, my Spanish professor read tarot cards on the Cape during the summer, and a few times we had to do our own readings in Spanish. I always, ALWAYS got the sword/skull of death – la espada de muerta?? So far, that thing’s been pretty spot on.

I don’t know about you guys, but I think these crazy kids are gonna work this out.

Tagged as Fighting without Shame