Japan Loses Old People in an Attempt to Honor Them 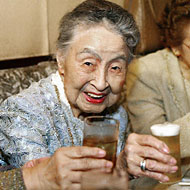 Japan is misplacing its really old people. Is misplacing the right word here? Maybe it’s better phrased as MSNBC put it: “loses track of its centenarians.”

Let me break it down for you. According to reports, Japanese officials admitted on Tuesday that they have “lost track” of a 113-year-old woman, who is recorded to be Tokyo’s oldest living person. But here’s the kicker – officials went looking for the woman only after a police search of the home of Tokyo’s oldest living man proved that said man was in fact dead, and his body had been resting in a mummified state in his home for approximately 30 years. Are. You. Getting. This?

Apparently next month marks a special celebration of the elderly in Japan, and officials were updating their records of the country’s really old people (which should be updated daily, no?) in anticipation of the event. After the supposedly 111-year-old King Tut was found to actually be dead, the search began to locate all of the possibly-still-alive/possibly-dead centenarians. Not only is Tokyo’s oldest living person – Fusa Furuya – missing, but several others are also “unaccounted for.”

See Nana?? This is why we don’t let you go anywhere by yourself! Stop trying to sneak off to the Best Market!