Matt and Debbe Sittin’ in a Tree…

In the first of a string of family weddings happening in the next year or so, my cousin Matt got married this past weekend to the lovely Debbe Dickinson at West Point. It was beautiful. The bride wore her grandmother’s dress. The groom wore his full Army dress uniform. Absolutely elegant. Until it hit about noon. Then, as my Uncle George likes to say, things got goofy.

So, weddings in my family, as they are becoming more and more these days, are a weekend-long event. What started Thursday night ended at about 1pm Sunday afternoon, and quite frankly I’m shocked people are still standing. Or going to work. Or are awake.

Friday night we rehearsed dinner, as they say. The Turnbulls rehearsed drinking. And we may have met our match in those Texans, who instead of Coors Light choose straight whiskey. And then put on cowboy boots and dance. It’s amazing. And, if anyone asks, I did not give any 8-year-olds wine. Did not.

So then things moved back to the hotel, and since my cousin Matt kept my cousin Tim out ’til about 15 minutes before his own wedding started, Tim made it his mission to torture Matt. It escalated. Tim dislocated his shoulder and Matt (again) ended up with a Bud Light box on his head, hyperventilating. So Uncle George kidnapped Matt and locked him in his hotel room. And Tim sat outside of it. For hours. Other things happened that I can’t talk about because I don’t want Nicole to have to relive them. But she knows what they are, and Nik, I apologize on behalf of my family. It’s not our best side. Bada-boom!

So, ok. The next day is Saturday and the wedding is set to start at 10:30. 10:30. Here’s the thing about my family: we don’t know how to pace ourselves, pretty much with everything – drinking, food, fighting with people. We’re balls to the wall at all times, or we’re sleeping. Texans apparently are very good at day drinking, and by 9pm there were more of them standing (in some cases literally) then New Yorkers. This led to me yelling about the Civil War, which I now see was inappropriate. Not as inappropriate as Uncle Dan’s “historical Tourette’s” which I can’t really detail here, but let’s just say it was in German and angry in tone. 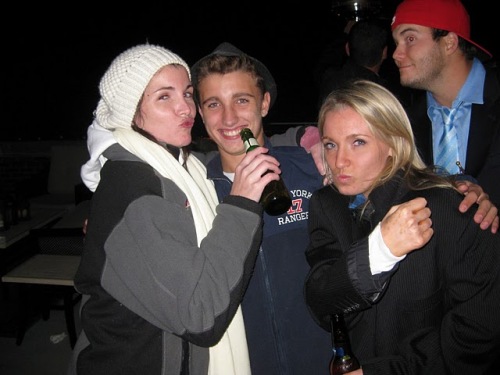 I called it a night after I started doing shots of tequila and cheering for some guy named Glen that bought them. And then I suggested to the bride’s mother that Debbe fight the other bride that showed up for the title of “King of the Hotel Roofdeck.” Understandably, she did not like this idea, but she’s so sweet she somehow told me it was an awful suggestion while still making me feel good about myself. I really liked her.

I walked home singing “DJ Got Us Falling in Love Again” because one of my vows for the weekend was to “get my Usher on” and I don’t really know what that means, so I was assuming I hadn’t yet. I added fist pumping for effect. It was an ugly scene. Add to that Mitch was carrying Sammie over his shoulder and Hank still had his tuxedo pants tucked into his cowboy boots. But he sang right along with me. Because we’re family now. And that’s what you do.

Congratulations to Matt and Debbe! We love you!!

Filed under BEST Things Ever, The Funny Thing About Family Is That You'll Always Be Related