Scenes from the Green Line 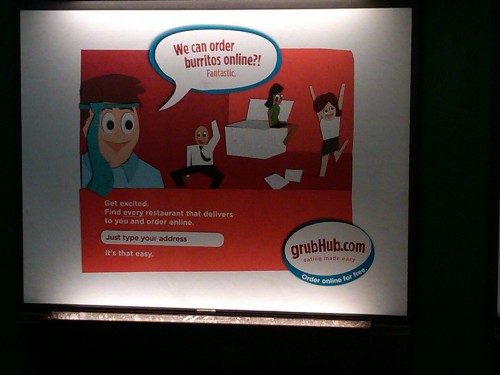 I spend a lot of time waiting for the T to show up. And while I try my best to fill those monotonous 10-15 minutes by coming up with some actual life goals or even an idea of what I should make myself for dinner, more often than not my attention is turned to the ridiculous advertisements the MBTA still insists on displaying. The one above is case and point.

Now don’t get me wrong, I love burritos as much as the next girl, and the possibility that they can be delivered to me during my workday is tantamount to a religious experience (Sidenote: there is another Boloco going in on Boylston Street; am I the only person in Boston that holds Chipotle in such a high regard?). However…what the EFF is going on in this picture???? I am at the same time bothered and intrigued by it. And you know what that means…Reenactment time!

So I’ve given these characters names, from left to right: Steve, Martin, Sheila and Chrissy. Steve has obviously lost control of his unit. Just the sheer thought of eating a burrito has turned him into The Fresh Prince of Bel-Air, the early years. Martin seems to be involved in some inappropriate pelvic thrusting, and I can only assume that Sheila is making photocopies of her butt. Chrissy is actually just kind of lame. She’s just not excited enough about the burritos, and is feigning some kind of cheerleader jumping. Get it together Chrissy.

This is obviously some kind of office party that has gone terribly awry. Everyone has been doing tequila shots since the boss left three hours ago. They are angry with him because he just announced that he will be diverting everyone’s year-end bonuses to charity. I know, right? Bastard. Martin yells out that tequila would only be better if they had chips and guac. Chrissy’s passed out at her desk. Sheila’s attempting to hook up with Steve, who at the same time has the eureka! moment that has brought us to this picture: “We should have burritos de-liv-ered.” That Steve really has a good head on his shoulders.

Looking into the future, the burritos are delivered, with 18 bags of chips. The group sits in a circle and eats. Chrissy possibly vomits. Sheila is now wearing only half of the outfit she came to work in. Steve and Martin call the IT guy to see if he wants one of several burritos that are left over because the delivery guy gave them someone else’s order. The trio comes up with a plan to divert the bonuses back into the company – instead of to charity – but only to themselves.

Five years later, Steve, Martin and IT guy are sitting in Steve’s house in Wellesley, which he purchased with part of the funds the three of them have been diverting into their accounts every month since that fateful office party. They are once again eating delivered burritos. A SWAT team surrounds the house. All three are arrested. Tried. Sentenced for embezzlement. Sent. To. Jail. Where you cannot have burritos delivered.

And then the T arrives. End scene.

The lesson here people is that food delivery can have a crazy effect on people. My own experiences have not been quite this exciting, but you just never know.

Filed under Around Town

Tagged as Blatant Drunkeness, Food, Great Commercials, Humor, The Crazy is Following Me

4 responses to “Scenes from the Green Line”