It’s a Little Thing I Like to Call Karma 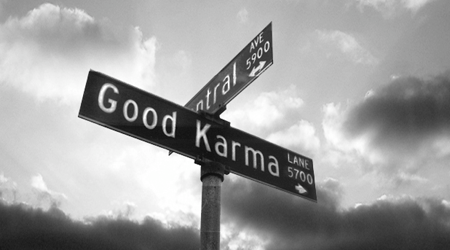 So, they say karma’s a bitch. Probably not so much because she’s mean, but because she’s so freakin relentless. She’s inescapable, and for anyone who thinks they’re above reproach, you’ll be hit the hardest. Not that I’ve become a devout Buddhist and all, but if you do bad things, you will inevitably have bad things happen to you. And here is where I’d like to begin my story.

I went to Williams-Sonoma this week to buy a shower gift for my cousin Fallon. If you’ve never been to Boston’s Copley Place mall, it’s where Fancy goes to have lunch with her girlfriends Entitled and Oblivious. I worked at the J.Crew there for 6 months while I was in grad school, and I once had a woman literally throw thousands of dollars worth of clothing over her shoulder at me as she rattled off that she could be shopping at Barney’s. So these are the kind of people we’re dealing with. Just painting a picture.

A very thin, very blonde woman was in line ahead of me as I approached the counter at WS. She had apparently chosen her best yoga clothes and biggest sunglasses (still on, even though she was inside and Copley Place is dimly lit) for the occasion. And she was returning wedding presents. Now, hell hath no fury like a woman who gets something she doesn’t want for her wedding, and she was taking all this anger out on the girl at the register, who, unrelated, was extremely sunburnt, and, I’m speaking from personal experience now, should have been exempt from such treatment based on that alone.

Now, this woman’s wedding had happened in May. So we’re talking almost two months since her registry had been closed. And the check out girl can’t find it! And she’s sweating! And the blonde has no receipts! And it was all just unraveling so quickly. The blonde girl whips off her sunglasses so that they’re no longer containing her ire. And the check out girl has to apologetically get a manager.

Now, this is totally coming from a place of “I’m single and attending a lot of weddings,” so nothing I say in the next few lines should be taken too seriously, but I feel like brides nowadays are getting a little ungrateful. This woman has probably had dozens of shower and wedding gifts. She’s had people toasting to her loveliness and grace and success for months, and now she’s pissed over some frying pans and a couple of Williams-Sanoma Ov-gloves. I do not feel bad for you lady. So it was with my great, great pleasure that the next scene took place:

Needless to say, the blonde is mortified. And everyone in line is giving each other the eye because we’re all loving that this girl’s friends don’t like her enough to actually buy her a wedding present. Ah ha ha ha. It’s evil, but there you go.

In my mind, this was karma in action. This was one mean lady, and she got what was coming to her. However, I didn’t stop to think about what I would get in return for laughing at her. Until a few hours later, that is.

Riding home on the T is miserable for about 99 percent of the population of Boston. The other 1 percent have no sense of smell and nowhere to be. Coming home from the gym that night, I squeezed myself into a space near the handicap alcove and hung on for dear life as the MBTA driver swerved his way down the D-Line. I had my headphones on. My gym bag was strapped to my back. And now I’m leaning on the handicap railing for support.

Somewhere between Brookline Hills and Beaconsfield, the train stops mid-track. Everyone is looking around, wondering why we would be making an emergency stop, except me, because apparently I was too into listening to T-Pain’s “Best Love Song She Ever Heard” on repeat. The conductor leaves his seat at the front of the train and steps out onto the track. He walks closer and closer to my car, as I obviously bob my head and wonder when we’re going to start moving again. I have a new episode of Pretty Little Liars to watch, after all. As the conductor stepped into my car, I turned to see what all the commotion was about.

“Ma’am,” he said to me. “Can you stop leaning on the emergency button?”

I removed my gym bag, which was up against the round blue bag and placed it on the floor of the train. “I am SO sorry.” I said to the conductor, my cheeks reddening with every eye that glanced upon me. And, I know, in their heads, they were all thinking “whatta dick.”

Tagged as Fighting without Shame, Humor, Life Lessons, The Crazy is Following Me