Proactive Has Moved Another Step Closer to Creating Its Own Race 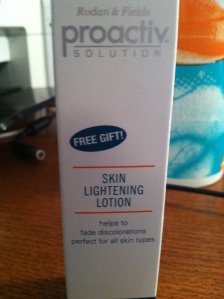 I have a love/hate relationship with my skin cleanser, the evil monopoly of Proactive. It’s love in that I can use it for like, 18 months and have great skin most of the time. It’s hate in that after 18 months, like clockwork, the shit stops working, I have to go off of it for like, 4 months, deal with my skin reverting back to how it was when I was 15, spend $800 on every kind of Neutrogena facewash CVS carries and then eventually go back to the Proactive, which now magically does the job again. Seriously, this has been going on for 7 years.

One day last year, during an in-between period, I was at Macy’s buying Clinique foaming cleanser (which, if you’re in need of a new face wash, is actually pretty good), and the sales person at the counter asked me what I had been using previously. When I said “Proactive,” she went into a tirade about how Proactive is basically crystal meth and you can never stop using it because once you do your skin will freak out. Proactive doesn’t give you great skin. It makes your skin addicted to it. Your skin looks great on the surface, but it’s actually a ticking time bomb just waiting for you to think you don’t need it anymore. I liken this to the way fashion models look just at the beginning of their cocaine addictions.

Anyway, I thought this Macy’s sales person was simply going to great lengths to try to get me to like her product. That was until last week when I received an odd “gift-with-purchase” with my 90-day supply of Proactive: skin lightening lotion. What. The. Eff.

Now there’s a lot of questions about this product, so I’m just going to start with my guttural reaction first: is it legal to sell people skin lightening lotion? Is this what Michael Jackson was using? Is this was really killed Michael Jackson? If I use it am I going to look like Michael Jackson? Secondly, I’m super pale already. How in the world is this going to lighten my skin? I think one level lighter for me would mean no skin. At all. On my face. Which sounds horrific.

How does the lotion know where the discolorations are? Can it see color? What if it makes my discolorations too light? And then I need a skin lightener for the regular colored skin? And so on? That could end in disaster. The Proactive repairing lotion removes color from my bathroom towels. Is that what my face is going to look like? As you can tell, I’m deathly afraid of this product.

So Proactive, if you’re out there, I need some answers before I will even think about using this business on my face. It definitely should have been accompanied by some kind of informational pamphlet, not hawked like it’s the best thing since sliced bread (which really is a great saying because is there anything that’s better than sliced bread? And what did they do before the bread was sliced? Did they just pull the bread off with their hands? Hm. Expect another post on this).

Tagged as States of Emergency, Things That May One Day Kill Me