Deportation: It Can Happen to You 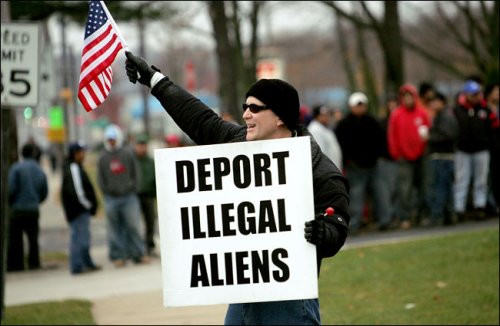 So I’m a little behind on my news because I moved and I have no internet in my new apartment (Time Warner comes on Tuesday and then I’m going to be killing life people) and work has been crazy and well, that’s it really. But I was recently reading this story about a teenage American girl who was erroneously deported to Mexico in May 2011 and was just let back into the States in January. This may sound extraordinary to some of you – implausible, you may say – but I am here to tell you that the line between unassuming American citizen and being arrested as an illegal alien is very thin. I should know.

Like any plucky and enthusiastic teenager, I made my parents take me to the DMV the day I turned 16 so I could get my learner’s permit. What a day! After years of driving my parents around town illegally I was finally going to have a piece of paper to hand over to the police when they pulled me over. I could not have been more excited.

While filing out some pretty simple paperwork, I came across a section I could not complete – my Social Security Number. May I remind you, this was a pre-September 11 world and people didn’t just know these things off the top of their head, especially teenagers. I panicked, naturally, because if I couldn’t complete the paperwork, I couldn’t get the permit, and my entire high school life would be ruined. Of course, my mom saved the day by advising me to simply insert her SSN for my own.

“They never check those things anyway,” she said.

Fast forward to the winter of 2004. I’m a 20-year-old college student. It’s the beginning of March, and I haven’t been home from school since Christmas. A few minutes after I walk in the door, my mother hands me a pile of mail, mostly advertisements that have accumulated since the holidays. However, one in particular was odd. It was from the New York State Department of Motor Vehicles, and URGENT was stamped on the front of the envelop. The enclosed letter read something like this (from what I can remember):

Since September 11, 2001 we have been doing extensive searches into the backgrounds of all New York State driver’s license holders, and it has come to our attention that your NYSDL Identification Number does not match your Social Security number.

You have thirty days to contact us, tell us how your mother coerced you into duping the government, and resolve this matter. If we do not hear from you within 30 days of the date of this letter, your license will be suspended, you will be considered an illegal alien, and when we inevitably pull you over for that broken tailight you refuse to get fixed, we will automatically search you for posession of marijuana and deport you. Go USA!

Some say I overreacted when I read this letter. I mean, inevitably there was a fight, mostly about my mom hoarding my mail so that I would get arrested and subsequently deported and then she and my dad would be free of my college bills. You know, normal stuff. I think I held it against her for approximately three months. And no joke I still bring it up when she does other things to endanger my well-being, such as the time I was watering her best friends’ marijuana plants for a week while they were on vacation and I was so certain the FBI was operating some kind of sting on me that I took a different route to the house every day and wore big sunglasses and hats. Without fail, I would always say “oh no yeah, it’s not as bad as the time you almost got me deported.” And her response has always been “Kelly, that would never had happened.”

Well Jeanie, it very much can happen, and your bluff has most definitely been called.

Filed under About Me, The Funny Thing About Family Is That You'll Always Be Related, WORST Things Ever

Tagged as News, States of Emergency, The Crazy is Following Me, Things That May One Day Kill Me

2 responses to “Deportation: It Can Happen to You”