I am Not a Slut 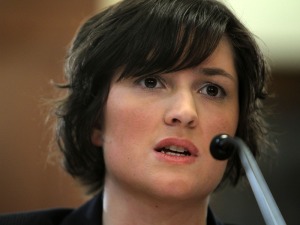 Editor’s Note: I didn’t want to get into this. I try to keep the blog light and funny and only somewhat demented at times. But I’ve become pretty much infuriated by this entire issue. So here I am.

Two weeks ago, a woman named Sandra Fluke testified on Capitol Hill to the need for women’s contraception to be covered by health insurance. After being snubbed on the first attempt to speak at a hearing (a hearing that, after she was denied the chance to speak, only included testimony from men), Fluke came back and told her tale to members of Congress. And then Rush Limbaugh called her a slut. And you all know the fallout from that.

During her testimony, Fluke spoke to the fact that a friend of her’s has polycystic ovary syndrome, which can be treated with birth control pills. This, however, has gotten lost in the firestorm that her testimony, and Limbaugh’s arrogance and misogyny, has caused. And that has been a very unfortunate casuality, as the public has turned this entire debate into a matter of sex. And it so very much is not.

I have polycystic ovary syndrome. And I treat it with birth control pills. And I very much am not a slut.

If you were to WebMd “polycystic ovary syndrome” (WebMd is now a verb), you will read that it’s “a problem in which a woman’s hormones are out of balance. It can cause problems with your periods and make it difficult to get pregnant. PCOS may also cause unwanted changes in the way you look. If it is not treated, over time it can lead to serious health problems, such as diabetes and heart disease.”

“Polycystic ovary syndrome (or PCOS) is common, affecting as many as 1 out of 15 women…PCOS seems to run in families…PCOS can be passed down from either your mother’s or father’s side…Common symptoms of PCOS include irregular periods, infertility, repeat miscarriages…PCOS raises your risks for serious health problems, including high blood pressure (hypertension), heart disease, diabetes, and uterine (endometrial) cancer.”

Let’s pause for a minute for a collective “WTF.” Ok, let’s continue.

Taking birth control for female reproductive issues can and will ease hormone imbalances, which will lead to better overall physical and emotional health in women. It can help reduce the effects of syndromes that, left untreated, can lead to ovarian problems and potentially surgery. And it can help reduce the chances that, because of these syndromes, the woman will become infertile. Funny – taking birth control can help a woman get pregnant, when she wants to.

It is extremely clear from what I’ve just told you that birth control is not just a means for women to go and have sex with whoever they want with no consequences. And to allude to the fact that this is our sole desire in life is ignorant and dangerous. I’m not here to say that the Catholic Church doesn’t have an argument. I won’t even get into that, because I’m not sure what the right answer is there. But let’s talk about what this is really about, and not make it an issue where women are made out to be whores. Honestly, this is serious to us and we’re tired of men telling us what we can and can’t be concerned about.

A man is never going to be the deciding factor in whether or not a woman is going to have an abortion. Or give a child up for adoption. Or keep a child and raise it for the rest of her life. That burden lies with us. However, the first form of contraception that will come to anyone’s mind when asked is the male condom. We are inundated with male contraception that can be bought at the gas station for $10. Yet, for years, I couldn’t get my insurance to cover a female form of contraception that was going to possibly ensure that in the future I could live a healthy life, free from ovarian cancer, with children of my own. And then someone called me a slut for asking for that to change.

So in the end, I just want everyone who reads this to know that this issue isn’t about sex. This is about control.