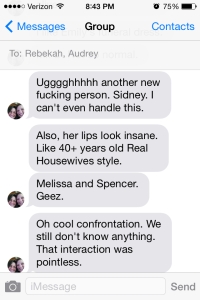 Thank you, Audrey. This was helpful.

Hello, people. As you hopefully read yesterday, I’ve employed a new Pretty Little Liars guru to help us parse through all this crazy. Unfortunately, after writing her inaugural post, Audrey went and got in a car crash. She’s ok (well, concussed), but I’m pinch hitting for this, the first of many, PLL recaps. Audrey will (hopefully) be chiming in via text, but due to like, damaged brain waves and painkillers, I’m not sure how much coherency we’ll get out of her. That said, we all know this show doesn’t make sense anyway. Here we go!

So when we left off last week, Aria was having some serious PTSD from (maybe) killing Shawna, who is (maybe, but probably not actually) A. Spencer is casually having sex with Toby in her bed in her parents’ house with the door open. Ali is visiting her OWN grave. Mona is rocking a killer navy blue sweater dress. And Emily and Hanna are following Jason DiLaurentis around town like it’s totally normal for two girls in leather pants to be standing on street corners in the dark. Mona threatens Ali and makes it pretty clear that we’ve started World War A now that Ali’s back in Rosewood. Oh, and Pepe finds Mrs. DiLaurentis’ hand in the backyard BECAUSE SHE’S DEAD. Totally normal.

This week’s episode was one of those that isn’t filled with a lot of drama. Instead, we got a lot of short scenes with seemingly pointless interactions that didn’t seem to move the story forward at all. Except they probably did and we just don’t know it.

We also had a few Hefty Hanna flashbacks, which are always ridiculous, because, as we all can see with our own bare eyes, Hanna wasn’t actually ever hefty. Her flashbacks shed light on the time after Ali disappeared but before Hanna became cool, where a now-popular Mona takes her under her wing. Apparently, Mona turned Hanna into Ali Redux, and Hanna’s just realizing it now, for the first time, approximately three years later. The flashbacks also include Hefty Hanna eating three cupcakes in one sitting. At my thinnest I could house four of those babies.

When Hanna wasn’t reliving a past that had her about five pounds heavier, she was trolling around with Emily. The two of them resume their PI status and go back to the building in Philly that they followed Jason to. They talked to a pizza guy for approximately five seconds and were able to decipher that Jason was really living at the apartment building when he said he was at rehab. Many conclusions were jumped to here.

Three minutes after proclaiming that she would never see Ezra again in her whole life, Aria voluntarily shows up at Ezra’s apartment. She hesitates to knock on the door, doesn’t, and then debates the action in the hallway until Ezra comes out. Ohmygod, what a coincidence, I can’t believe I ran into you in YOUR HALLWAY. Ezra is all hobbling and scruffy and sweatpants-wearing and Crazy Eyes Aria is all like, this is the man of my dreams.

Inside Ezra’s apartment, nobody mentions that the walls are bare and there’s no furniture because Aria had a complete meltdown and totally Hurricane Sandy-ed his stuff. I guess they’re even, so they’re letting bygones be bygones. Ezra is all preachy about the girls allowing Ali to tell the kidnapping lie. Step the eff back, Ezra. You’re a child molester. Let’s not throw stones in our glass house.

After giving Ali Ezra’s book manuscript, Aria GOES BACK to Ezra’s apartment AGAIN, tells him she killed Shawna, and it’s cemented that he’s back in the picture. I can’t.

Spencer spends the majority of the episode defending Jason against Hanna and Emily’s accusation that he must have killed Mrs. D. They think Jason was the person who tried to kill Ali, and Mrs. D. covered for him by burying her. This is the first sensical thing that anyone on this show has said. So, of course, it’s probably not true.

Spencer and her dad only talk in dark rooms with a fire going at this point in the show. Mr. Hastings is mulling over the idea of selling the house. He’s FINISHED with the DiLaurentis’, you guys. Spencer doesn’t understand his need to cut ties, after all, he HAS A SON WITH THE DEAD WOMAN. Spencer confronts Jason with an email his mom wrote two hours after she was last seen on the night she died. It reads “I can’t protect you anymore.” But the recipient(s) of the email are undisclosed. Jason says Mr. Hastings can’t be trusted, doesn’t elaborate, and leaves. Because that’s a good way to protect people.

Spencer then confronts her dad with the same email. While they fight nonsensically about it, Melissa comes in and tears it up. Because we’ll never be able to print out that email again, Melissa. She wants to tell Spencer WHAT SHE KNOWS! But Mr. Hastings stops her. “You can’t lie about something you don’t know anything about,” he tells Spencer. And that totally mollifies her and she drops the whole thing and she goes upstairs and studies. HAHAHAHAHAHAHAHAHAHA. No she doesn’t.

Ali freaks out about a painting she sees in the funeral home and has to go have a panic attack in the bathroom. The painting is of a white figure on a boat headed toward large rocks. That’s all I can say about that.

Sidney Driscoll. Do I care? I don’t know.

Spencer thinks her parents think she killed the girl that’s actually in Ali’s grave. You can’t just make these statements and not flesh out this storyline. I feel like we get two seconds of the “actual dead girl” and then we move on to something else. WHO IS SHE?? WHO KILLED HER? WHO PUT HER IN ALI’S GRAVE? WHERE ARE THE POLICE?!?!?

Do you guys think Aria is feeling so guilty because she WANTED to kill someone? Like, she just had it, she lost the man of her dreams, and she wanted revenge. Ride-or-Die Aria.

Paige: desperation is not a good look. It’s over. Take yourself through those stages of grief, girl.

The episode ended with Hanna at the salon washing the Ali out of her hair, while Mona secretly watched from behind frosted glass and then conversed with…Ali?!?!

Emily: Coincidences happen.
Spencer: Yeah, all the time. They grow on trees, like coconuts, waiting for you to walk under them.

Til next week, bitches.

Tagged as Pretty Little Liars, Things That May One Day Kill Me, TV Review