Things That Are Making Me Happy This Week

A day late, but not a dollar short.

I don’t really know where I’m going with that except that I am a day late with this post, and I apologize. The Fourth of July got the better of me, and it took an entire extra day to recuperate. I even took off from work. It was serious.

This is the week me and my family leave for Scotland, and I couldn’t be more excited! I could probably write this entire blog post about our trip, but I’ll refrain until it’s actually here, or until we come back and I actually have stories to tell. Instead, I bring you this week’s happy things, courtesy of Fourth of July Weekend (and one elephant):

Sitting on the Dock of the Bay: Watching the tide roll away. That’s what happening in this video (the video at the top of this post). Prior to Sandy, my family and I spent a lot of time on our neighbor’s bulkhead, watching the sunset. On the Fourth of July, we can see the fireworks from Smith Point Park, Mastic, and Westhampton. Though the rain shook up the firework schedule, we sat on the dock on the fifth, and it was still glorious. 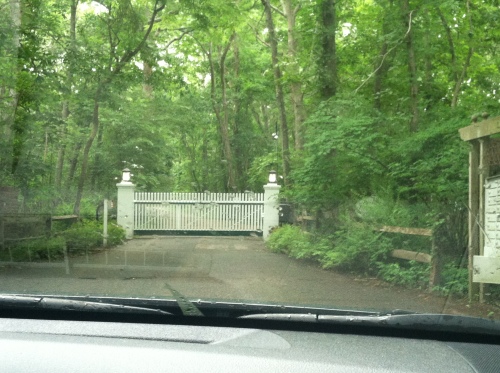 Anna Wintour’s House: The rain on the Fourth also forced many of us to go excursion-ing. A few years ago, a family friend told me that Anna Wintour lived in Mastic Beach, N.Y., the town neighboring our family’s beach house. I did not believe this at all, because why would someone like Anna Wintour, the editor of Vogue and subject of The Devil Wears Prada, not have a house in the Hamptons? Well, I was reading about Wintour’s son’s wedding a few days ago, and the article also mentioned her compound in Mastic Beach. So we Googled Mapped, as only a good P.I. can. We found the house (well, we found a gate at the beginning of a private road in a very wooded area) and the mystery is solved. I may be the only one that cares, but thankfully, I can now sleep at night.

Free Raju the Elephant: According to the Daily Mail, Raju, an Indian elephant, was chained up for more than 50 years and was freed by a wildlife group recently. When he was unchained, it’s said that Raju cried tears of joy. While initially this makes me a little farklemt, it also makes me happy that even after 50 years, relief can be provided to suffering animals, or really anyone that’s suffering from anything. You go Raju!

Filed under Around Town, BEST Things Ever, Field Trips

One response to “Things That Are Making Me Happy This Week”