“Those Are the Type of Flights that Make You Wanna Do Good, Change Ya Life Around. Lol.” 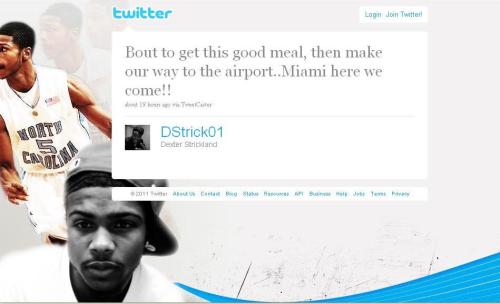 Apparently there was danger in the skies last night as both the UMass and North Carolina men’s basketball teams faced some scary conditions at very high altitudes.

Let’s start with UNC first. According to FoxNews, the Tar Heels left Raleigh-Durham airport at approximately 8 p.m. for a flight to Miami to play the Hurricanes. Storms in the area (not hurricanes, but tornadoes), rerouted the plane over the ocean. At approximately 10 p.m., it is believed the plane “graced the threshold of the storm line causing it to twist.” While some media outlets have toned down the nature of the landing, ESPN’s SportsCenter Rundown this morning mentioned that the plane’s flight direction was reversed in less than a minute.

Obviously grappling with the tension and adrenaline this kind of scare would cause, some Tar Heels immediately took to their Twitter accounts moments after landing to express their feelings of fear, relief and their love of God:

Junior guard Larry Drew II: “Those are the type of flights that make you wanna do good, change ya life around. Lol”

Junior forward Justin Watts: “Thank him!!!… That flight was the worst ever. Thought we were going down for a sec.”

Sophomore guard Dexter Strickland: “I still have my barf bag in my pocket.” Good job, Dexter.

Just north of this fiasco, the Minutemen were also experiencing a scare of their own, this time from smoke that started in the cockpit of their plane. On their way to St. Bonaventure, the team made an emergency landing in Albany, NY. And, showing their gravitas, elected to take another plane the rest of the way, instead of opting for a bus ride to Olean. Refuse to lose, UMass.

On a serious note, both incidents come just before the 10-year anniversary of the plane crash that killed two members of the Oklahoma State men’s basketball team, as well as 10 members of the school’s traveling party on January 27, 2001. Tell the pilot to drive safely, he has very precious cargo.

Filed under College Basketball Is My First Love, Wide World Of Sports, WORST Things Ever

Tagged as NCAA Basketball, News, Sports, States of Emergency, Things That May One Day Kill Me