With the situation in London getting scarier and crazier, I can’t help but think that not even 5 months ago the UK was united in the celebration of the royal wedding. I’ve been re-watching parts of the royal wedding on my DVR every morning this week (it’s something I’m doing; it’s weird, I’m aware), and the contrast between the smiling, cheerful faces in the crowds surrounding Westminster Abbey and Buckingham Palace and the pictures of masked men in track suits setting fire to neighborhoods on the outskirts of London is eerie. It’s amazing how quickly things can change.

And then again, it’s amazing how they stay the same. When you really think about it, our country was built on rioting, rebellion. History is not blank when it comes to uprising. If anything, unrest is the center of almost all of our historical, significant and global events. I’m currently reading Edward Rutherfurd’s epic novel, London, and the entire book (a work of historical fiction) surrounds the periods in history we now consider turning points, and they are all influenced by rebellious events. 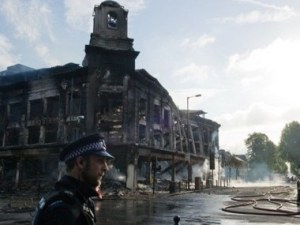 London, during the current riots.

With all this said, these rioters themselves are disgusting, and to say they’re going about their rebellion in the wrong way would be a gross understatement. Rebellion to some carries a bad connotation, but true rebellion – unrest for a greater cause – carries with it responsibility. To not recognize or care about that is foolish and irresponsible. And it makes rioters like the ones in the UK part of the problem, not the part of the solution.

I’m a lover of London, and because of that, I take it personally when anyone tries to attack it. You live in one of the most historical cities in the world. Protect it. Make it a better place. You’re making your country look foolish on a global stage. You’re ruining buildings that survived the Blitz of World War II. You might be jeopardizing London’s 2012 Olympics. And ultimately, you idiots, the people you’re hurting is yourselves.

London, during the Blitz.

“It is a complete lack of responsibility in parts of our society – people allowed to feel that the world owes them something,” raged British Prime Minister David Cameron on Wednesday. And he’s right. When did we become a world where people thought they didn’t have to be responsible for their actions? Where people decided that they were exempt from consequence? Well, you rioters, be careful what you wish for. If a world of anarchy, arson and looting is what you’re after, you just may get it. And at the end of the day, no matter how hard you may try to fight it, it will be your responsibility.

Tagged as Fighting without Shame, News, States of Emergency, Things That May One Day Kill Me

One response to “London Calling”