The Streets of Heaven are too Crowded with Angels

It wasn’t lost on me that I would be moving back to New York very close to the 10th anniversary of the September 11th attacks. I wrote last year about what that day was like for me, and how it changed my world. Because 9/11 had such an impact on me and my family, I thought it was only right that I pay a visit to the Ground Zero site this weekend.

The last time I was at Ground Zero was 2001. I remember the posters and pictures of loved ones who were still missing. They were posted for blocks, on the walls of buildings, on the gates of Trinity Church. Although at the time we all kept up hope, 10 years later, many, if not all of those people were never to be found. I remember people crowding the streets. So many people had flocked to Ground Zero 10 years ago. I remember piles of rubble.

As we approached the Ground Zero site, we could hear a choir of children’s voices singing. We couldn’t see them, but we assumed they were practicing for today’s ceremony. To hear the sweet voices coming through the dazzling skyscrapers and over the vast building site was both eerie and comforting.

To our right, a memorial to the firefighters and police who lost their lives on 9/11 was encased in the wall of a building beside Ground Zero. About 50 people stood in front of the site, some leaving flowers and flags, some taking pictures, some talking to the handful of reporters who had come down to the site to get a few stories. 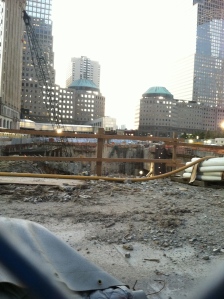 Above us, the new buildings rising from the ashes of destruction were beautiful. Since the sun was setting, the colors of the sky were reflecting in the sides of each building that surrounded us. American flags flew from each one. Walking across the Liberty Street Bridge, we could see into the “Footprints” of the North and South Towers. The water was running, again in preparation for today’s ceremony, water being a beautiful sign of rebirth.

The scene at Ground Zero 10 years ago and the scene today definitely have their differences. But there is a distinct feeling that will never leave the place. It’s one of sadness, but it’s also one of strength. Years from now, when all of the rubble is gone, those “Footprints” will be a great reminder of what we lost, but also a reminder that we can carry on.

A few weeks ago I was watching an episode of The West Wing. An episode from over a decade ago, before our world changed so drastically. Ironically, all the problems were the same ones we have today: an economy falling, warring political parties, and even terrorist attacks. It made me realize that there are some things in life that may never change, that may be out of our control. But what we can control is our love, and how much we show that love to each other. We can control our good deeds. And we can honor the good more than we hate the bad.

“The streets of heaven are too crowded with angels, but every time we think we have measured our capacity to meet a challenge, we look up and we’re reminded that that capacity may well be limitless. This is a time for American heroes. We will do what is hard. We will achieve what is great. This is a time for American heroes and we reach for the stars. God bless their memory, God bless you, and God bless the United States of America.” – The West Wing