Don’t Worry Guys, I Found the Root of All Our Problems 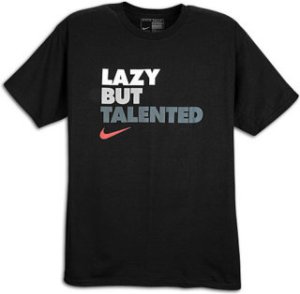 Before we get going with tonight’s Presidential Debate, I wanted to let everyone know that I found the root of the economic crisis, the unemployment rate, and the obesity epidemic.

Yesterday, while I was innocently sitting in a Chipotle on Broadway and 110th Street (I know, this doesn’t give me a lot of credibility), I spied a full-grown man wearing this Nike t-shirt. Ok, let’s walk it back slowly.

1) Why would anyone admit to being lazy? I can certainly think of a few people this t-shirt would fit perfectly, but I know none of them would own up to the fact that they are squandering their talents. I don’t know the gentlemen who was sporting this garb yesterday, but judging by his dirty hair, headband, mesh basketball shorts, and slippers on the sidewalk, I’d venture to say he wasn’t being ironic. So there are people out there who don’t care if others think they are lazy. Ok. Minus one for America.

2) Why is Nike making this line of t-shirts? Nike is the ultimate fitness clothier, and certainly makes its billions based on people wanting to exercise. Are they ok with creating a generation of children who will never get off their ass to do anything? Selfishly they should be concerned. At the very least it could cut into their revenues.

3) It’s hard not to make connections between this t-shirt and the current economic and social situation we’re facing in America today. We are definitely talented as a nation. We are smart, we are dynamic, we are creative. But what good is that if we don’t use it?

4) There’s a possibility that these t-shirts were manufactured in China, and wouldn’t it just be “kick-you-in-the-crotch-spit-on-your-neck-fantastic” if that entire country was just playing some enormous prank on us? Think about it.

I want these t-shirts gone. Burned. Outta here. If you’re wearing one right now, look at yourself in the mirror and start laughing. That’s what everyone else is doing.

Filed under Wide World Of Sports, WORST Things Ever