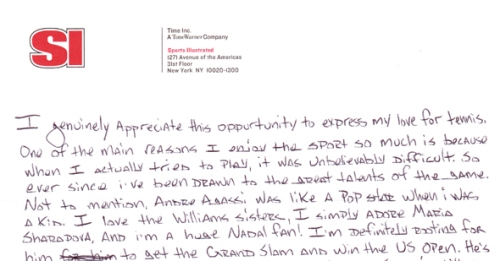 Remember that episode of The Office where they find out that one of the employees from the newly-merged Stamford branch is an ex-con? And Michael get’s all offended because he thinks the employee is making jail sound better than Dunder-Mifflin? So he creates “Prison Mike” to let them know that prison is nothing but dropping the soap and eating gruel? Well, “Prison Mike” was wrong, because Lil Wayne is making jail seem like the life I want to have.

When Weezy isn’t making new music (which I can’t even do from my apartment, go figure), he’s apparently blogging about everything that is sport. So Sports Illustrated decided to send him some sheets of their letterhead and asked him to write about the U.S. Open. “The U.S. Open, 100 words, go!” And trust me, giving things to people in jail is not easy. I tried to give my business card to a murderer once and they had to test it for a day to make sure it wasn’t laced with drugs. This is a completely true story.

Wayne “simply adores” Maria Sharapova, but is giving the edge to Kim Clijsters on the women’s side. And obviously, he’s backing Rafa for the men. It’s things like this that make it good to wake up in the morning. Respectfully, Kelly.

Filed under BEST Things Ever, Other People's Stuff, Wide World Of Sports

One response to “Lil Wayne’s Thoughts on Tennis, From Jail”