J.R. Martinez Wins Dancing with the Stars and Restores My Faith in America 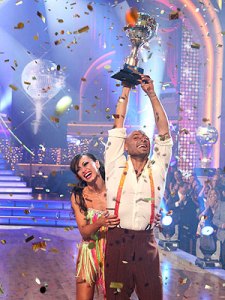 If you didn’t already know, J.R. Martinez was my frontrunner for the title of Season 13’s DWTS champion. The man could dance. He had charisma. And most of all, he had a backstory that literally made me cry every time he spoke.

After suffering physically-altering wounds as a young solider in Iraq, Martinez championed his depression, took stock of the hand he was dealt and decided he was going to make the most out of the life that he now faced. He became an actor. He became an advocate and representative of wounded soldiers across the nation. And he went on live television and attempted something he’d never done before. And America responded. And for that I am proud.

J.R. was up against a reality television powerhouse in Rob Kardashian. And if there’s anything reality competition show voters like in this life, it’s more reality television. Kim Kardashian is in the middle of Humphrey-gate. Kris Jenner has a book out. Lamar Odom is around because of the NBA lockout. Kendall and Kylie are becoming names in their own right. Baby Mason in his Native American Halloween costume just about made everybody coo. And Bruce Jenner’s face just keeps getting tighter and tighter. It’s safe to say the Kardashian voting block was a juggernaut in its own right.

Being the reality television connoisseur that I am, I could see this season of Dancing with the Stars being handed to Rob K. because of his family and his family alone. Not that he wasn’t talented, because he was. But so was Chynna Phillips. And Kristen Cavallari. They were voted out early. Rob’s boost was that he and his family are at the height of American culture right now, like it or not. J.R. Martinez was a solider a lot of people had never heard of.

But America will always surprise you, and this week the voters proved that we still value a good underdog story. We still want to be inspired by those people who look defeat in the face and say “not me, not today.” We still have heroes.

By the end of this season, I barely even noticed J.R. Martinez’s scars. What I saw first when I looked at his face was his smile. His bright eyes. His laughter. His confidence. And I hope that it’s a lesson for everyone who watched this show and has ever had personal adversity. We all have challenges in life that we have to overcome. We can and we will. And when in doubt, just put a smile on your face and dance it out.

Filed under BEST Things Ever, Do Something For Humanity For Crying Out Loud, TV FANatic